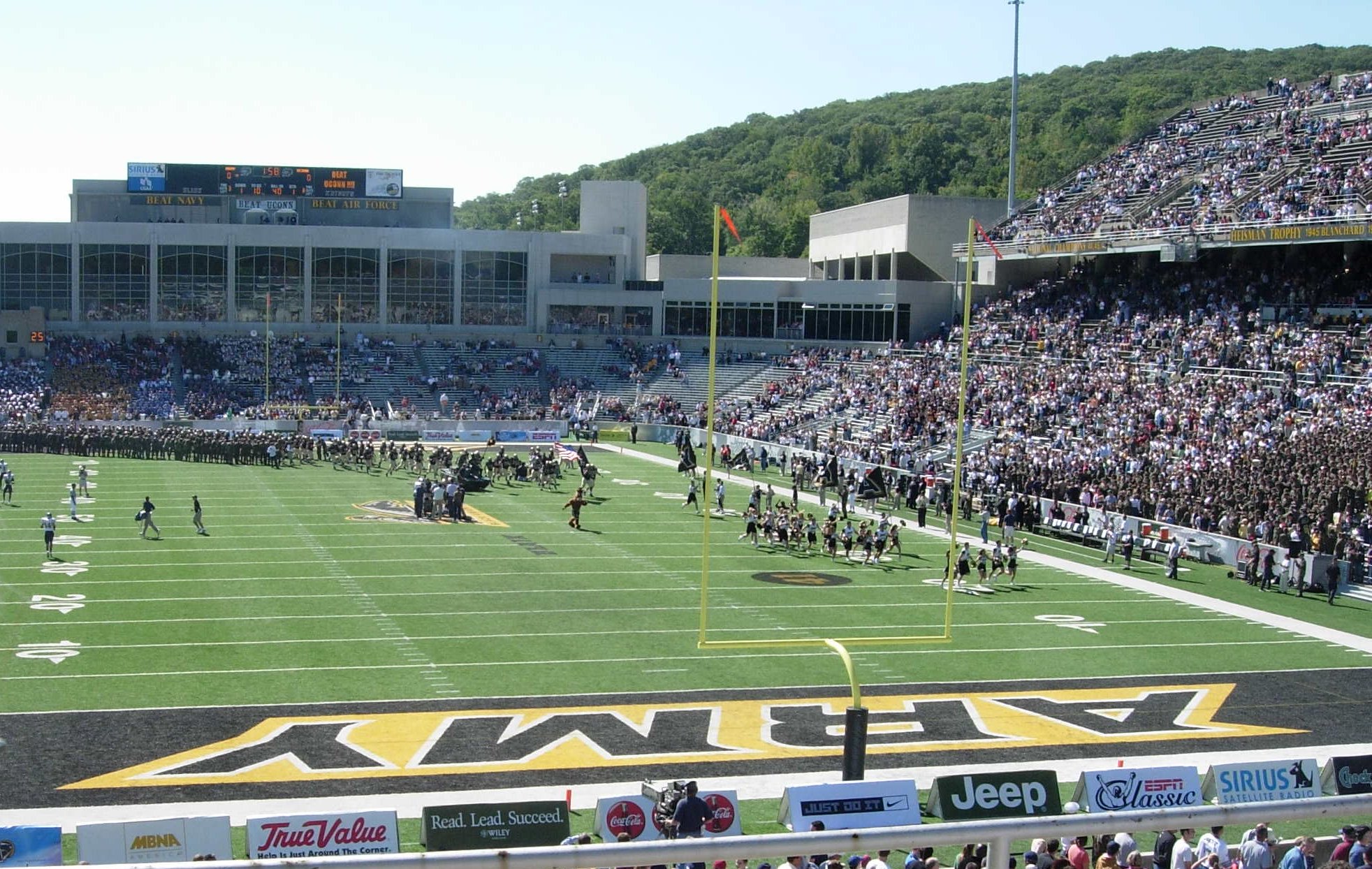 Michie Stadium is an outdoor football stadium located on the campus of the U.S. Military Academy in West Point, New York. This arena is the home field for the Army Black Knights since its opening in 1924. Its current seating capacity is of 38,000.

The stadium sits at the upper portion of the U.S. Academy campus, directly west of Lusk Reservoir. The field is at an elevation of 335 feet (102 m) above sea level. It also runs in the traditional north-south configuration with the press box above the west sideline. Additionally, Sports Illustrated’s rated the venue as #3 sports venue of the 20th century. This is due to the view offered by its location overlooking the Hudson River and the Neo-Gothic architecture of the campus below.

Michie Stadium is dedicated to the memory of Dennis Michie(1870–1898). Michie was instrumental in starting the football program while being a cadet at the Academy. As a member of the Class of 1892, Michie organized, managed, and coached the first football team at West Point in 1890. Sadly, six years after graduation, he was killed in Cuba during the Spanish–American War.

The academy realized the need for a permanent athletic field as Army’s football program continued to assert itself nationally in 1923. Thus, West Point officials selected a patch of meadowland adjacent to Lusk Reservoir and within the shadow of historic Fort Putnam. Construction of Michie Stadium was completed in 1924 which was just in time for Army’s 35th football campaign. There have been several renovations since the stadium’s first game in October 1924, when Army defeated Saint Louis, 17–0.

Other than that, Michie Stadium has hosted the Army-Navy Game only once, in 1943 during World War II. Neither Army nor Navy has played at an on-campus facility since both teams’ home stadiums are not large enough to accommodate the crowds and media that usually attend the rivalry games. Their rivalry games are normally played at a neutral site between the campuses on the East Coast. It would usually be in Philadelphia, in early December.

Prior to the construction of permanent East stands were completed in 1962, temporary East stands and upper stands were added. In the summer of 1969, an upper deck on the West side was added which boosted the seating capacity to 41,684. Capacity has since been adjusted to 38,000. The biggest crowd attendance happened in 1972 when the Black Knights averaged a record 41,123 fans. Army was ranked top among the nation’s attendance leaders in 2000, averaging 38,516 per game, or 96.5 percent of Michie Stadium’s capacity.

A major change occurred on the playing field in 1977 when AstroTurf replaced the natural grass surface that was installed since Michie Stadium’s opening. The artificial turf greatly reduced maintenance costs and guaranteed the Army team an excellent practice facility while providing for multiple uses. SuperTurf replaced the AstroTurf in 1984. Later in 1992, it was again replaced, this time, by AstroTurf 8 in 1992.

In honor of legendary mentor Earl “Red” Blaik, Army christened the stadium’s playing surface “Blaik Field” in 1999. Blaik was a gridiron innovator. He compiled an 18-year Army record of 121-33-10 and brought Army its only three national championships (1944, 1945, 1946). Blaik is enshrined in the College Football Foundation Hall of Fame as the most victorious coach in Army annals. On that fine day, the Black Knights honored the dedication in grand style by beating Ball State, 41-21.

In the summer of 2001, Michie Stadium received another improvement as the aging AstroTurf8 surface was replaced with AstroPlay. The replacement gave a cushy feeling that gives players the look and feel of playing on natural grass.

The entire stadium annex is the jewel of aggressive athletic facilities that almost seems like a village on its own. The entire 2002 renovation plan included major improvements to Gillis Field House, Shea Stadium, Johnson Stadium at Doubleday Field, Clinton Field, and Malek Courts. In the spring of 2002, the Army dedicated the Gross Sports Center, which provides the Army gymnastics team with a state-of-the-art home. The center also works as an extra indoor space for the Black Knights’ basketball programs.

The construction of the $7 million Hoffman Press Box was completed in the spring of 2003. The new press box includes a full-service media operations center with state-of-the-art radio and television broadcast booths.

More construction work on the $40 million Kimsey Athletic Center, just outside the south end zone, was also concluded in the spring of 2003. The facility houses world-class locker rooms, coaches’ offices, athletic training facilities, equipment rooms, meeting rooms and the Kenna Hall of Army Sports. The hall shows a large display area that chronicles the Army’s vast athletics history. Construction of Randall Hall, the project’s second phase, was completed past the summer of 2003.

Ticket Policies:
Find out more about our ticket guarantee and other ticket policies.